I began acting at the age of seven when I played a little princess in the King and I and a young Beatrix Potter, where I got to be on stage with a live rabbit. By the time I was a teenager I was performing regularly in summer Shakespeare, playing Kate in Taming of the Shrew and Rosalind in As You Like it.

At Sheffield University I read English and got my first taste of devising with the company Reflex Theatre (who later changed their name to Point Blank), performing in a small-scale tour of their production Last Orders directed by Elizabeth Tomlin.

Graduating with a first-class degree, I  joined the MA in Performance Studies at Central School of Speech and Drama, where I got to work with Primitive Science and take workshops with international artists such as Eugenio Barba, Gardzienice, Pan Theatre, Philip Zarrilli and Vladimir Ananyev. 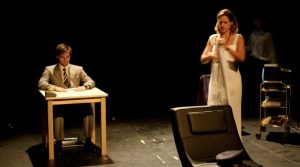 I then won a dance and drama award to train as an actor at the Oxford School of Drama.

On graduating I continued to work as a collaborator in devised theatre, while also taking on acting roles in film and theatre.  I became an associate artist of the devising network the Playground Studio where I worked on the R&D of a number of new projects with artists such as Kamaal Hussain, Sophie Hunter, Andi Osho and Lisa Forrell. I also worked as a deviser and performer with companies such as Demonstrate (Primitive Streak), Little Wonder and Lucia King on Arts-Council-funded projects 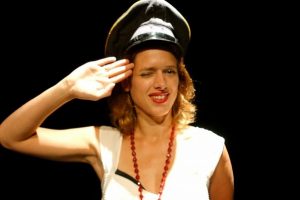 I was chosen as one of four British actors to travel to Malawi to devise a show about the crisis in Zimbabwe in a cross-cultural collaboration with performers from South Africa, Zimbabwe and Malawi with the company Nanzikambe. It was there that I met my husband, the disabled dance artist Shyne Phiri.

I am now returning to performing after a pause to make three children.

For my full acting CV check out my profile on Mandy.